Another month of surprising Foodie Penpal connections! Last month, I was paired with a fellow native of my hometown, Bloomington, Indiana. This month, Caitlin of Bake ‘N Bits sent me a box of local treats from… Somerville, MA! That’s just around the corner from our old apartment, and where we still frequent a lot for drinks, haircuts, etc. 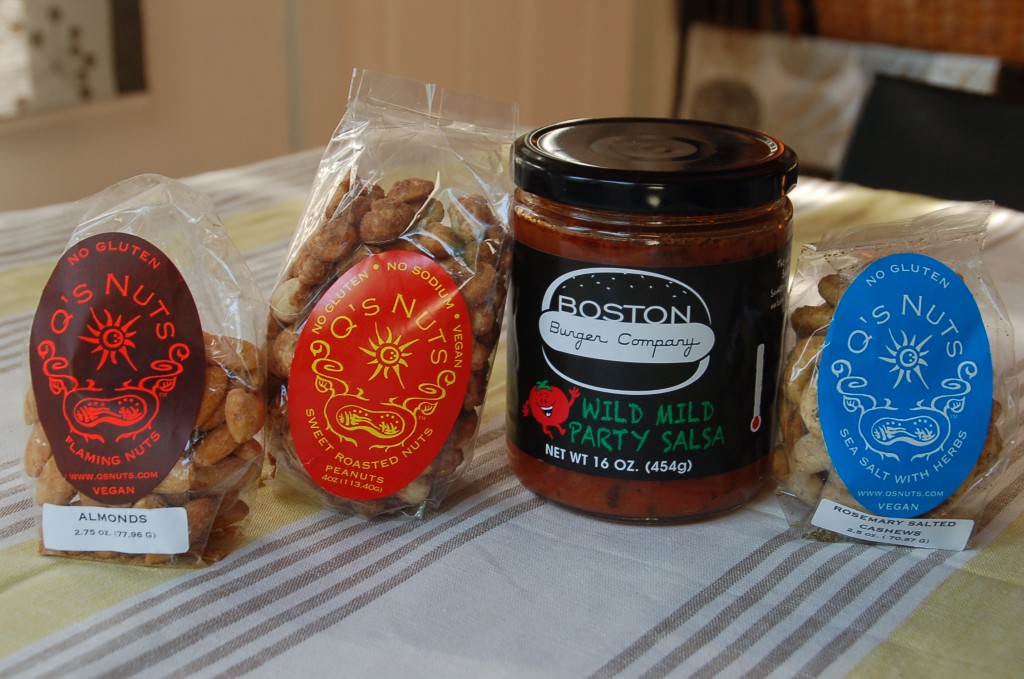 Caitlin’s note said she found it funny when I asked for local foods, given how we’re basically in the same “local.” But the things she sent – homemade salsa from Boston Burger Company, and three different roasted nuts from Q’s Nuts – were all new to me. So thanks for introducing me to some new treats from just down the road!

Want to swap foods from near or far? Head past the jump to find out how to participate in Foodie Penpals in June! (It’s open to bloggers and non-bloggers alike!)

END_OF_DOCUMENT_TOKEN_TO_BE_REPLACED

If you bought 10 bags’ worth of groceries, would you chuck four of them out the window on the way home? Unless you were doing some really weird cross-training for upper-arm strength, no, of course you wouldn’t.

But it turns out that most of us are doing something like that, because up to 40% of edible food goes wasted in the United States (NRDC pdf). Some of that is lost on the fields or in transportation before it reaches stores; but we consumers contribute a good share of waste, as well.

One of the oft-mentioned solutions is to compost food scraps – it cuts down on the millions of pounds of food waste piling up in landfills, and returns nutrients to the soil for future crops. But what if we skipped the compost middleman and went right from scraps to food? It turns out, it’s stupidly easy to do.

Pretty much any food that you would buy with its root end (leeks, scallions, bok choy, cabbage, onions, celery, garlic) or that easily sprouts new buds (potatoes, ginger) can be resurrected from its leftover bits with just some water and/or soil plus a little light. Andy Whitely wrote about 16 veggies you can easily regrow on Wake Up World, and you can find little summary charts all over Pinterest.

I recently tried my hand at this with leeks and bok choy, and it really is as easy as Teh Internets say. The leeks sprang up within a mere 24 hours of me putting the hacked-off root ends in water, and the bok choy has re-leafed itself nicely (although, it keeps trying to bolt on me).

So if you start regenerating vegetables, what are you going to do with all those second helpings? Glad you asked, because I’ve found a week’s worth of recipes that use these easy-to-restart veggies:

Whoa, how did another month of training for the Covered Bridges Half Marathon already go by? It’s less than a week from the event, and a little surprised to be here already.

At any rate, now it’s time to take stock of the 11 weeks of training gone by, and assess whether a new HM PR is in the cards for me this weekend. The verdict? After all the miles I’ve put in – and the hills I’ve sprinted up, and the intervals I’ve plodded through – I wish I could say that a sub-1:50 half marathon was in the bag. But the truth is that over the last 4 weeks, my threshold workouts (where I did 6-8 miles at HM pace during 8-11 milers) have been disappointing. This was the first training cycle where I ran these workouts instead of conventional tempo runs, thinking I was at a point where I needed race-pace workouts more than all-the-other-possible-pace workouts. And maybe I did, to at least show me that my actual race pace may not be at PR level this time around.

I’ve always known I’m not a naturally fast runner, nor one whose speed would dramatically improve with some more-intense work. But like any runner, I like to do better each time. So for this race, better may have to just be another state ticked off the race-in-50-states list, rather than besting 1:50.

But another thing I’ve come to know is that running can be unpredictable. Several LRs and faster-pace interval workouts went surprisingly well for me during weeks 8-11, so there’s always room for an upset. Let’s see who’s right – skeptical me or wildcard me – in just a few days from now.

I’ve met my goal to raise at least $500 for Health Connections of the Upper Valley so I can run CBHM with their team! But if you’re interested in playing overachiever, any level of contribution you could make via my donation page would be greatly appreciated!

For Love of the Week: Farming, Food Culture, & Twitter

There’s a thick layer of neglect-dust on For Love of the Week – a used-to-be-regular round-up of people & things I think are noteworthy in food & nutrition. So exhale sharply before we get going here, & apologies to anyone with some dust allergies.

For this Friday, a few things I’ve been mulling over:

What have you been reading, watching & listening to lately in the world of food? Let me know in the comments! My fellow ReDuxers are gracious hosts, offering up French toast bread pudding, pretty pink beet hummus, broccoli & egg muffins, and strawberry-rhubarb mimosas or coconut mock-jitos to wash it all down. And while I love me some brunch – so much so that my inaugural post focused on this great all-morning meal – I just couldn’t extend the invitations this time around. I’m in the middle of an all-out effort to get our little Cape house ready to sell, and I’m pretty sure the paint fumes would be off-putting to guests. 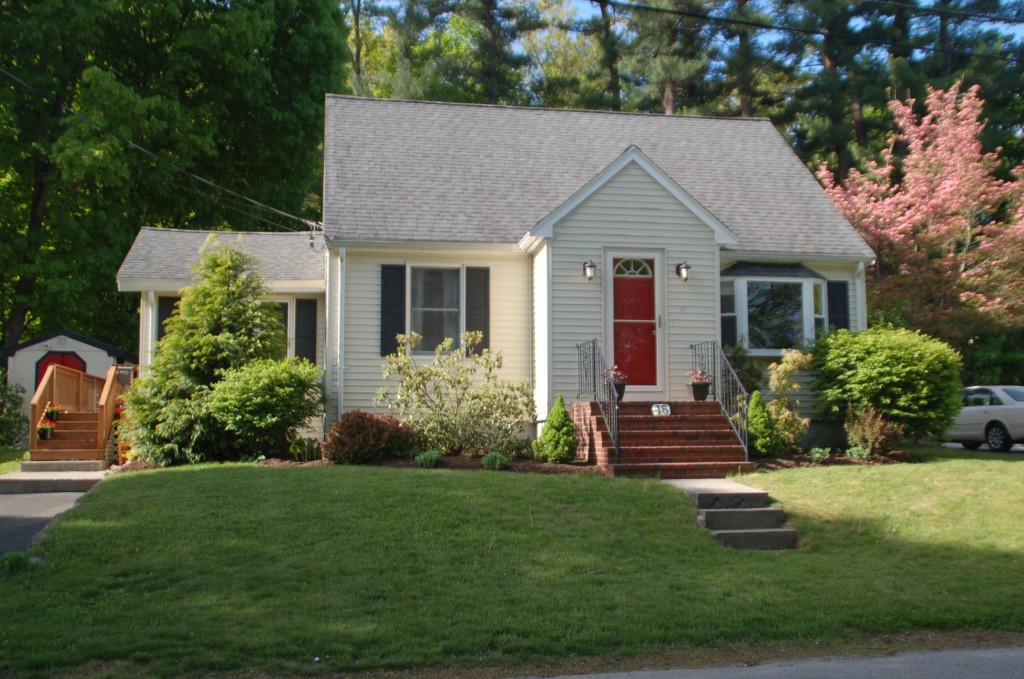 But don’t let my poor hosting skills keep you from enjoying May shower season! You’ll find links below to more than 50 great brunch ideas from this talented, health-and-tasty group:

Did spring go from zero to ALL OUT in roughly 14 seconds where you live? It sure seemed that way here in New England, where the boxes of dirt and pine needles we called our vegetable garden sprang to life almost overnight. Plants going gangbusters currently include some beans (tended by a gopher family)… …and a surprise appearance by this week’s star, asparagus. It’s not a complete surprise to see the asparagus – it’s there thanks to our planting last year, not because of some Johnny Asparaseed sneaking into our backyard. But we were under the impression that asparagus plants took at least 2 years to produce edible stalks, so when that (admittedly, small & overgrown) bunch of spears shot up unexpectedly, I had to scramble to figure out what to do with it.

I went with a long-standing spring favorite of mine: the white bean, leek and asparagus panzanella from Smitten Kitchen. It’s a colorful, vibrant mix of spring’s best that highlights the unique flavors of each component. But, of course, there are innumerable things you could do with those slender green spears – and the more the better, since asparagus is a good source of several vitamins (especially K), minerals (including iron), and the pre-biotic fiber, inulin. Give some of these a try, and see if asparagus surprises you, too

I’ve been around the block a few times when it comes to yogurt, so I’m pretty confident that Siggi’s Icelandic-style yogurt (skyr) is one of the best out there. 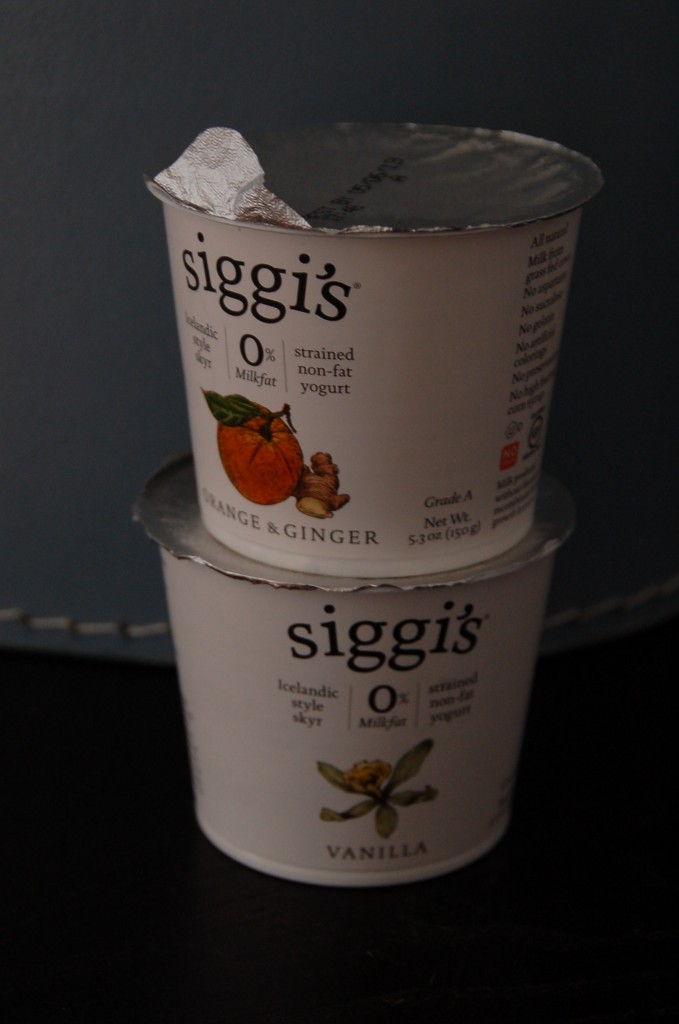 Skyr is a strained yogurt (we tend to call them all “Greek yogurt,” but this recipe’s Icelandic in origin) that is thick and full of good bugs (probiotic, in the lingo). What I like about Siggi’s compared with most other strained yogurt brands is they rely on natural flavorings and don’t dump a ton of extra sugar in. So you get a rich, tasty yogurt, a big hit of protein, and no 17-syllable ingredients.

My recent Twitter-fawning about Siggi’s mixed with almond butter caught the eye of Icelandic Milk & Skyr Co., who then sent me a bunch of coupons for their products. I have three sets of 2 coupons each – one good for a free 3.5 oz cup of Siggi’s skyr, and one good for $1 off any Siggi’s product (single-serve probiotic drink excluded) – to give away to ETW readers. If you’d like a chance to get a set, head past the jump for details!