I recently submitted a short piece to be included in an upcoming cookbook, waxing poetic about our new-ish tradition of hosting New Year’s Day brunch that centers around soft, sometimes savory, often sweet stratas. Sure, the brunch menu always include scones and fruit salad, coffee and juice, but everyone’s really there for the strata (our friend Annie, for example, has moved over the years from “Soooo, what are you making?” to “Seriously, make the strata.”). I’m all too happy to oblige, because they are a cinch to serve at brunch – I pop it into the oven before my traditional New Year’s Day run, and a few miles and a shower later, my family and our friends are gathered around the good stuff. When the folks at Cabot sent me their reduced fat cheeses to show off their recent package re-design, it was a no-brainer to use the pepper Jack in a vegetable strata I knew would bring people running (in my case, literally). The cheese gives it just enough kick to keep things interesting alongside the sweet bell peppers, tomatoes and savory mushrooms. 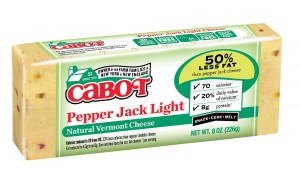 The recipe for my pepper Jack and veggie strata follows below, and if you want to round out the week with stratas every morning, here are six more recipes I found around Teh Internets. Where some of these (the Martha Stewart and Oprah recipes, for example) use whole milk and a bazillion whole eggs, you can save a few calories by using lower fat dairy and using roughly 1.5 egg whites instead of each whole egg:

I don’t actually measure how much bread goes into this, but it’s probably about 5 cups of bread cubes.

Heat the olive oil in a large pan over medium-high heat. Once it gets shimmery, add the onion and garlic and cook for 3-4 minutes. Add the bell pepper and mushrooms, and cook for another 4-5 minutes or until the mushrooms have released most of their water. Remove the pan from heat.

In a medium-sized bowl, combine the milk, egg whites, whole eggs, cumin, chili powder, oregano and black pepper. Whisk together and pour over the contents of the baking dish. Press down gently on the top with a spatula, to compress the layers and allow the liquid to soak into all the ingredients.

Cover with foil and allow to sit for at least 30 minutes but ideally overnight in the fridge.

When ready to bake, heat the oven to 350. Bake the strata at 350 with the foil on for 25 minutes; then remove the foil and continue baking for another 25 minutes.

Remove from the oven and let it sit for 5-10 minutes. Slice into 8 pieces and serve with salsa of your choice!